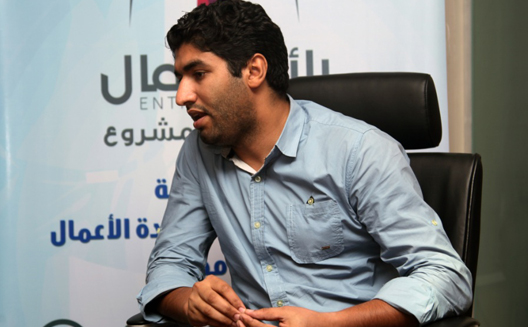 As Egypt’s startup community continues to grow, coverage of entrepreneurship here has remained the domain of Western or more regional Arabic outlets, until now.

Abdel Hafez, an entrepreneur himself, is also a founding member of the Egyptian Business Development Association, a business support organization based in Cairo.

Last month, Entrepreneur released the first issue of its print magazine. At $3 each, the publication includes interviews with the Ministers of Industry and Communication, the Vice President of Al Ahly Bank, and the Central Bank Governor, in addition to community polls on the situation of regional and Egyptian entrepreneurship ecosystems. Most of the published articles were original content written specifically for the magazine.

Keeping politics out of it

The team’s professionalism – and aversion to politics – stands to make it a strong, and hopefully objective, voice in the Egyptian media community. With current political uncertainty in Egypt, the team’s members are intently aware of the risk of political encroachment; a banner reading ‘No Politics’ hangs on the door of the news room to ensure no one forgets.

The one-hour radio show is broadcast on Radio Egypt three times each week, on Sundays, Tuesdays, and Thursdays, and has quickly become a popular topic of conversation among Egyptian entrepreneurs, especially among those invited to be a guest on the show. Guests have included Ziad Aly , CEO of Alzwad Mobile Services, Dr. Achraf Chatta, President of the Middle East Council for Small Business and Entrepreneurship, Dalia AlSaid, Manager of Startup Cup, Mohammed AlAyouti, Senior Manager of Vodafone for tech investments and entrepreneurship development, and Ihab Al-Foula, cofounder of Tamkeen Capital.

By early 2014, Entrepreneur plans to launch their TV show, first online, but with the goal of getting a spot on the airwaves. The show will be divided into three sections: 1) expert advice to business entrepreneurs, 2) success stories features, and 3) an overview of Egypt’s funding opportunities.

When I met with AlAtar in his office, he said that he expected the project to start making a profit in the next two to three years, relying heavily on advertising as a main source of revenue (similar to Ideaneurs, another entrepreneurship magazine launched in Egypt in May). But, given the current political climate, AlAtar was unwilling to make any concrete projections.

As the platform grows, it may eventually run into direct competition with the well-established international Entrepreneur magazine, or their regional Entrepreneur Levant, of the same name- unless they stick with their Arabic spelling of 'Ra2dA3mal'. Though this publication doesn't target Egypt, it may be in their future plans, especially as the ecosystem there grows.

At this point, all AlAtar and his ambitious partners say they can do is continue to hope, work hard, and wait to see how things turn out in Egypt. But if all goes well, when the dust settles, Entrepreneur seems well on its way to becoming a leading voice on Egyptian entrepreneurship.