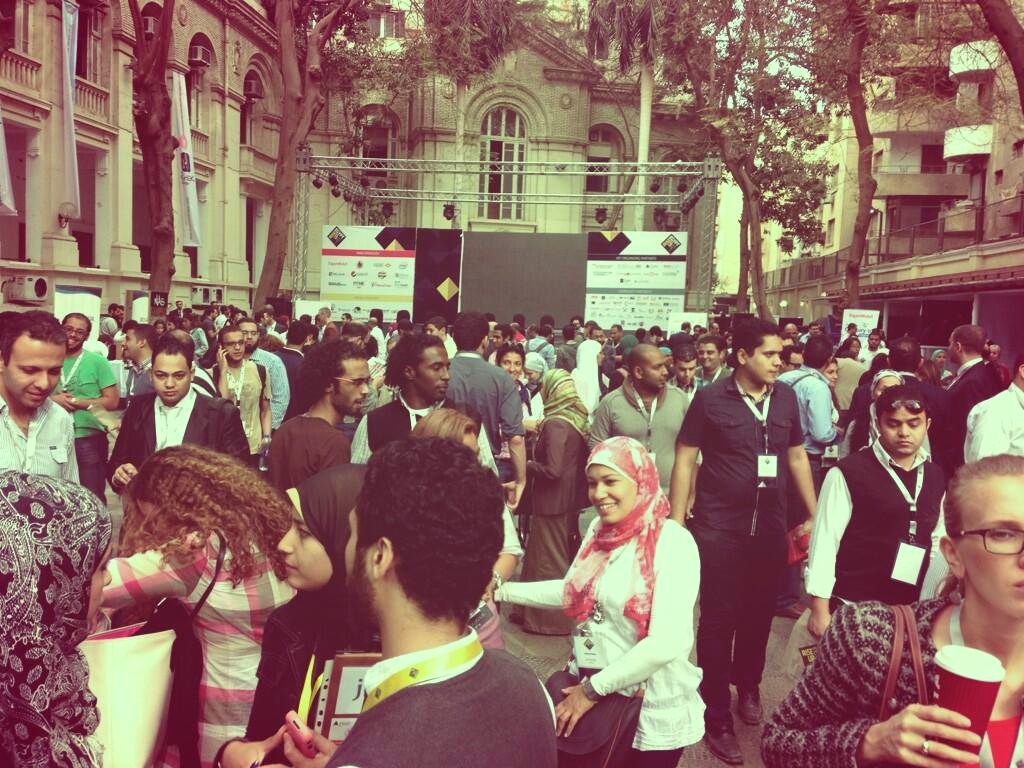 Tahrir Square will forever stand as a symbol of Egypt’s revolution and its ongoing transformation, its power seared into collective memory both by images of mass elation at the moment of regime overthrow, and the haunting tales of violence that have followed. While the roundabout itself holds no unique sway, it has become a focal point for the world's lens on leadership in Egypt. Last Sunday, the iconic location gained a new significance that could shape it for decades to come, with the launch of Rise Up Egypt, the country’s first major entrepreneurship summit, and the unofficial inauguration of a new entrepreneurship center at The GrEEK Campus. Tahrir itself lay eerily quiet that day, thanks to military tanks and barricades set up to stem potential demonstrations on the 100th day after the incidents at the Raba'a mosque. Yet down the block and around the corner from the dusty square, at the American University in Cairo’s old campus (formerly The Greek Campus), hundreds gathered to affirm a wholly apolitical movement. Lead by tireless organizer Abdelhameed Sharara, with help from a who’s who of startup supporters (the MIT Enterprise Forum, MC Egypt, Endeavor Egypt, Cairo Angels, AUC’s Entrepreneurship and Innovation Program, Cultark, Flat6Labs, Injaz Egypt, and Wamda), Rise Up Egypt was, despite its challenges, a watershed moment.

Despite the surrounding military roadblocks and the fact that the campus itself has lain dormant since 2008, the event definitively established- if it was in doubt- that tech entrepreneurship is no longer a fringe aspiration among Egypt's youth, driven by accelerators and Startup Weekends. It’s now an unstoppable force, led by founders of all ages and backgrounds, and affirmed by a new home at the heart of Tahrir. That home- now called the GrEEK Campus, with the emphasis on “geek”- will need substantial renovation, but this is just the beginning of what may be a lifetime achievement for Ahmed Alfi. The generous, candid co-founder of accelerator Flat6Labs and VC firm Sawari Ventures is leasing the campus from AUC for the next 10 years (and beyond) through Tahrir Alley Technology Park, an entity he’s created to support a new five floor, 25,000 square meter space complete with tech labs, meeting rooms, seminar halls, and glass-walled office spaces. Come early 2014, the GrEEK Campus will be ready to host any aspiring or established entrepreneur, while providing on-site eating options and a nursery for families. He hopes the space will "transcend politics," he's emphasized. What the two-day conference offered was a glimpse into that imagined future, when The GrEEK Campus’s full potential is realized; with two full schools, a library, and recreation space, it could become an entrepreneurship epicenter not just for Egypt, but for the entire Arab world. That may be a grand aspiration, but it suits a time of great need. If Egypt’s entrepreneurs are to succeed, and rise above the challenges that their ecosystem currently presents, they will need the solidarity and education that perhaps only a complete campus can provide. 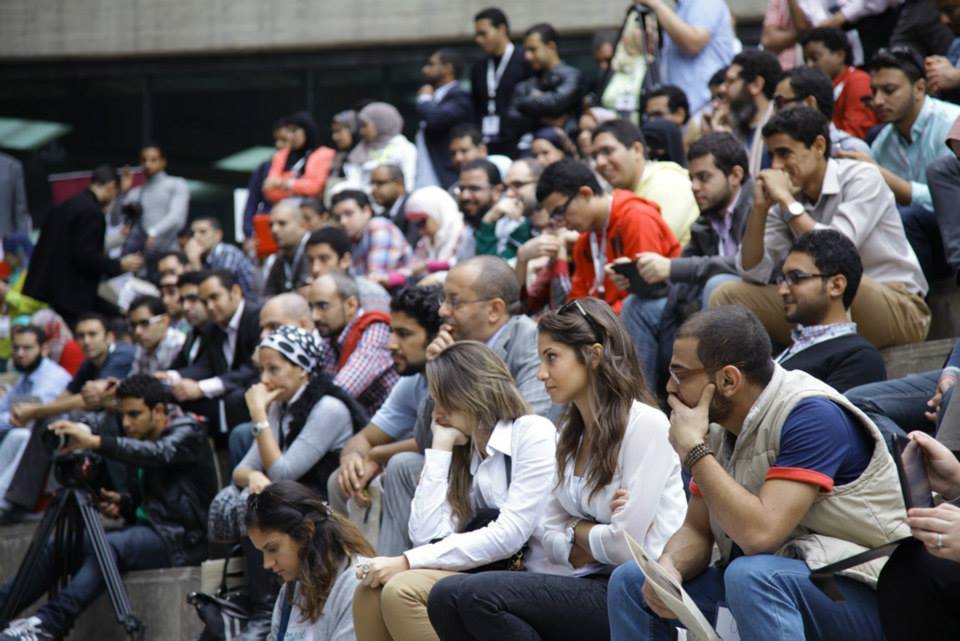 Egypt's next generation of economic leaders As entrepreneurs and attendees ate shawarma and lounged on the campus steps to watch inspirational talks organized by Endeavor Egypt, a sense of student community was already in effect. Venturing into the library, attendees watched panels and fired questions at panelists on topics ranging from investment to e-commerce, women in business, and the role of incubators, accelerators, and government in entrepreneurship.    Business, however, isn’t driven by inspiration alone; entrepreneurs also spent the two days earnestly pitching to investors at several events, including a Hackathon, a Cairo Angels pitch event, and the MC Egypt Agricultural Business Plan competition.

At Wamda’s “Pitch n’ Mentor” advice session, we were impressed to see that the session stretched to three hours as entrepreneur after entrepreneur stood up to debut his or her idea and receive feedback in a packed room. Afterwards, registered entrepreneurs pitched to investors while riding around in a taxi in “Pitch n’ Ride”- another unique Cairo touch. For the most part, Egypt's more established startups revealed growth despite the year’s challenges. While some of the Flat6’s brightest tech stars, including Instabug and Integreight, were abroad, other changemakers like education platform Nafham, e-waste disposal company Recyclobekia, and biotech company D-Kimia demonstrated their progress, along with veterans Wasalny, payment solution PayFort, about-to-launch reality TV show El Mashrou3, and Eventtus, which organized and sold the event’s tickets, among others. New innovators included Rooftops Egypt, a company that builds gardens, gyms, and even coffeeshops on the country’s neglected roofs, El 7esab, a mobile payment system, and eye-catching 360-degree rendering platform 360daleel, which displayed stunning interactive panoramas of Tahrir Square at the height of the protests (although a B2B model ensures that their revenue isn’t dependent on nostalgia).

Hipster fashion line NAS Trends had a great booth at the front of the event, featuring t-shirts and hoodies with jokes and cartoons, and several others made an impression, including Elwafeyat, an online obituary site whose early traction- while it may be proving the viability of its model- can’t help but feel a touch macabre. New accelerator Juicelabs made a splash, and others, like Jordanian video how-to site Ekeif, looked to strengthen ties with the Egyptian market, or, perhaps, the global set of investors who joined for a solid Cairo Angels event. 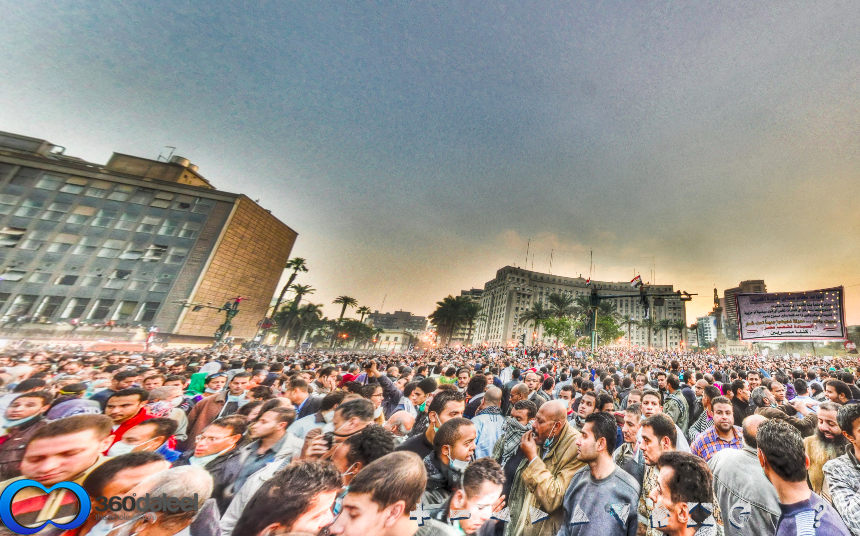 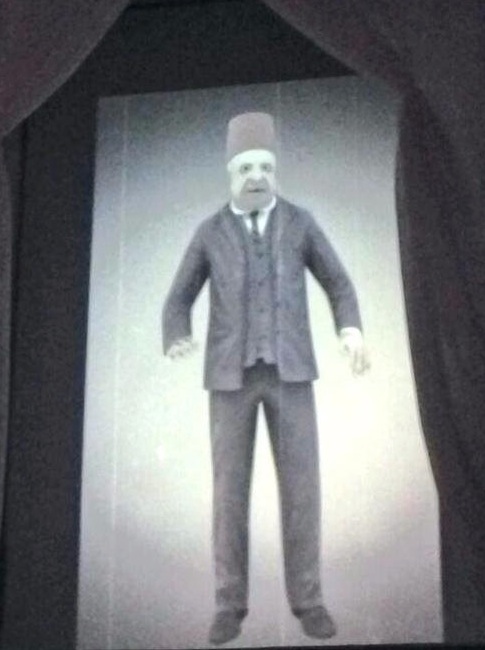 What Rise Up Egypt did well was debut the GrEEK Campus to great fanfare, and establish Cairo Angels as an investment community with clout. Now, the pressure is on for ecosystem leaders to make the space a truly usable support system for Egypt’s entrepreneurs. But if anyone can do it, it’s Alfi, along with GrEEK Campus CEO Tarek Ali Taha, and, perhaps, the spirit of leading Egyptian economist Talaat Harb, whose birthday fell on the second day of the event. That last visionary provided the event’s capstone moment. After an MIT Enterprise Forum Google Hangout with entrepreneurs across the Arab world and leading thinkers in San Francisco, Boston, and Cambridge, Rise Up Egypt debuted a film rendition of Harb, drawn from an old photo and dubbed with a speech that brought the crowd to its feet with a rousing invocation to embrace entrepreneurship. At the end of two days, this may have been a simple trick, but it demonstrated what sets Egypt apart, and what will surely continue to galvanize The GrEEK Campus: unshakeable tenacity and a taste for magic.

[For more photos, check out the Rise Up Facebook page.]