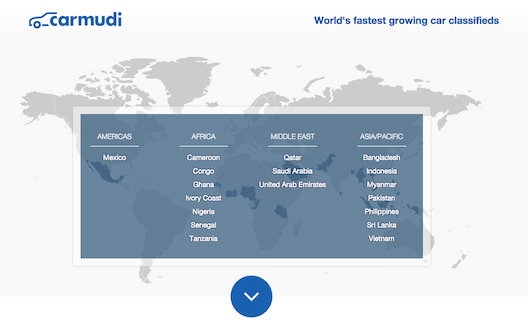 Over the years, the Samwer brothers’ Rocket Internet has made a name for itself; if not for its business model, for its aggressive (and buzz-worthy) investment and management strategies (read our deep dive into how one of their biggest startups is growing their user base in the Maghreb). If nothing else, the story you’re about to read is a great example of a Rocket Internet company aligning its cards and entering a region that is 1) an emerging market and 2) shows promising mobile and internet penetration rates.

Launched in 2013, Carmudi is a car classifieds platform that now serves more than 12 markets, from the Philippines to Pakistan, and more relevantly three of the region’s hottest markets, Saudi Arabia, Qatar, and the UAE. In my call with Carmudi Middle East’s cofounder and Managing Director Kerem Kuyucu, I had the chance to learn more about the startup and its rapid expansion.

Simply put, the platform is a one-stop-shop for everything related to vehicles, both new and used. As cofounder and global managing director Stefan Haubold once said, “with Carmudi, we provide a service similar to online dating, except with cars. We want to change people’s habits and how they think about shopping for cars and motorcycles.”

Essentially, the platform allows both individuals and dealerships to buy and sell private cars, motorcycles, and commercial vehicles online.

With a recent hefty $10 million USD investment raised to expand its operations in Asia, Rocket Internet’s car classifieds portal is moving quickly. After expanding into Nigeria, Pakistan, Bangladesh, and Indonesia, the team headed to South and Central America before making a splash in the Philippines, Vietnam, and moving on to African markets. Fast. So fast, in fact, that its tagline is “the world’s fastest growing car classifieds”.

Granted, car turn over rates in the UAE, Saudi Arabia, and Qatar markets they’ve expanded to are high (in these markets the number of personal cars per household has been steadily increasing, bucking the global trend). Yet with healthy regional competition like Dubizzle, is running a Rocket model enough to enable the startup to make a smooth entry into three of the region’s hottest markets, without an army of market-savvy boots on the ground doing the grunt work?

A graduate of Babson’s entrepreneurship program, Kuyucu came back to his hometown of Istanbul thinking he’d get into SME consultancy. That’s until he received a call from Rocket Internet saying that the multinational would be dipping its toe into the Turkish market. “That’s when I made the best decision of my life and decided to embark on the journey,” says the entrepreneur. After a 1-year long tenure at Rocket Internet GmBH (where he started as an operations specialist and climbed up the corporate ladder to become co-director of the production team), he moved on to head the Qatar expansion of FoodOnClick, a YemekSepeti affiliate, Kuyucu, a big car enthusiast, was tapped to lead the expansion of Carmudi into the Middle East. Pruning his hires, he’s built a team of around 20 members handling IT, content, as well as sales and marketing, all distributed across the region with the majority being in the UAE. 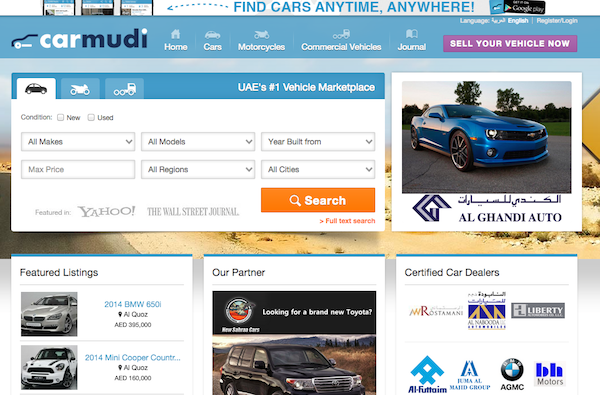 Is there space for another player?

Rocket’s decision to bring Carmudi into the region was based on more than a hunch. The region’s promising mobile and internet penetration rates and its hunger for vehicles - people in the region don’t keep their cars nearly as long as people in the rest of the world - are all signs the German incubator behemoth looks for when studying where to expand.

Although Rocket Internet have been in business for seven years, and have already cut their teeth in the regional market with Namshi and Easy Taxi, Kuyucu concedes that being a leader in foreign markets does not guarantee a smooth waltz into the ecosystem. “You always have to work on localizing. We’re working with data-driven companies that are giving us insights like Google and Namshi,” he adds. This will allow them to build on trends in user behavior and e-commerce.

Carmudi may have difficulty breaking into the space, though, because others have already established themselves in the market. Big player Waseet, present in over 30 cities across the region, also offers listings for used cars. It has been in print for over a decade, and after the redesign of their website last year, the portal boasted an increase in traffic (bringing their monthly total to to 650,000 unique visitors).

Cutting a nice slice of the market

Dubizzle, present in 21 cities across the region, has also built quite a following. A quick search reveals over 50k used car listings in the UAE, and over 20k in Lebanon only. Bkam, Auto Trader UAE, or Sell Any Car are also in for their share of the market. Cary! is yet another potential contender, though with a focus on crowdsourced mobile listings. Although it builds on the strengths and popularity of social networks, one thing that remains to be seen is how crowdsourced listings will fare with regards to accuracy of data, especially when curated competitors like Dubizzle and Carmudi ensure content is clean and curated.

Currently, Carmudi ME are at around 25k listings in Saudi Arabia, Qatar, and the UAE. Their focus is on B2C, with dealerships selling to individuals. Their next step could be a modernized approach to C2C, where individuals can sell their cars to buyers, with a automated quality control for later to weed out anomalies. Although this C2C feature is already available on the platform, it is not yet a feature the startup is pushing. For now, they’re focusing on bringing the UX to a stellar standard.

“Take Saudi Arabia for example. It’s a young population, with 75% of the population between the ages of 18 and 35 in the cities. They’re the younger generation of customers who are looking for a great experience online. The other key area of focus is mobile; we are in one part of the world where mobile is more important than web experience.” Spot on?

Whatever they’re doing seems to be working. According to an article on Zawya, “Carmudi is seeing a monthly growth of nearly 100% in the UAE and Saudi Arabia.”

Depending on the number of listings, dealerships pay a monthly fee on a sliding scale. There are now close to 300 dealerships on the site, with 40-50% of them updating their listings themselves, facilitated by team members teaching dealership staff how to use the site, even creating customer dashboards.

And if a user needs a loan to pay for their new car, the platform features bank-sponsored loan calculators (much like content site Motoraty), which also works as a revenue stream for Carmudi.

Although they’ve only been in the market for six months, Kuyucu tells me that that’s been enough for them to understand the need to work on a new design that would be better adapted to regional users. “The services are going to be relationship based,” he explains when discussing the customer’s journey through the sale. “We leave everything offline to the users and the sellers, and we take care of everything else that is online, and if the sellers are having difficulties in converting those online leads, we can provide suggestions.”

When I probed him about ensuring customer loyalty and continuity, he said: “We first want to master the buying and selling experience. Once we make sure that is satisfying our expectations at 100%, the next step is car parts, workshops, and even car washes.”

“The region’s problem? It’s definitely at the customer satisfaction level. That’s the game we are focusing on right now. You have to reach them on a personal level and build a relationship, even if it means making a few exceptions that will make them talk about you. At the end of the day, you have to give them something to talk about.“