Egypt birthed the Middle East's first delivery website with Otlob.com in 1999; today its digital food and beverage sector is finally expanding as Egyptians develop a taste for food startups’ products.

Furthermore, although the grandfather of Egyptian online food Otlob.com was sold to Rocket Internet in October 2015 for a surprisingly low price, the deal highlighted a sector that today is finally emerging from under the shadow of the local industry leader. 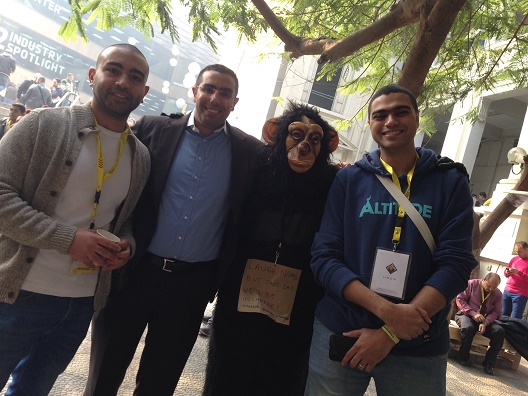 Many of the founders interviewed see Egypt as an interesting place to experiment with food and tech because wages, visas and set-up costs are relatively low, allowing the development of faster and cheaper pilot projects.

They attributed the rise of food startups to several factors, not least being Egyptians’ love for food and the massive market size of a country of 90 million people. Research suggests that Egypt’s broader food and beverage sector will continue to see strong growth this year.

The rise of social media has also allowed any restaurant to have an online presence, and epayment options and smartphone penetration rates have made mobile-based services easier to run and accepted by cash-loving Egyptians.

And finally, there are increasing numbers of young professionals looking to the internet to decide what to eat on a daily basis; this segment is driving the development of better services that facilitate their eating habits. 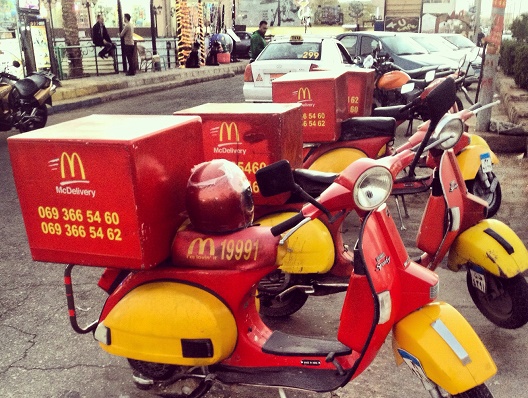 “If you can crack the operations [side of the business], the return would be massive. Startups can learn from larger companies that have achieved such goals and circumvented obstacles in other verticals,” said Bassem Fayek, senior associate at Strategy& (previously Booz & Company).

Fayek, who lives between Dubai and Cairo, did point out one problem with launching a digital business of any kind in Egypt and particularly in a sector such as food where people are used to paying with cash.

“Online payment is not catching on with the majority of the market,” he said, as trust in online payments had not yet been established.

He uses himself as an example: a tech savvy consumer who does not hesitate to use online payments in the UAE, but shies from the concept in Egypt - like the 72 percent of consumers who still use cash to pay for online purchases - including food.

Food delivery is the headlining food and beverage sector around the world as well as in the Middle East, and in Egypt Otlob is not the only business in this game.

Gedety is a catering company founded in 2013 and specialising in delivering healthy meals to businesses with whom they have standing contracts, such as Rush and Microsoft. The only exception to their B2B operations is their kiosk at the Greek Campus, which was their first and only consumer-facing location.

Other startups with more of an experiential kick are Easy Pan and Just Cook, delivering recipe kits with pre-measured ingredients for ready-to-cook meals. Grocery delivery service Knockmart is an online store with a hotline to order groceries to one’s doorstep.

Gedety managing director Yasser Negm said the challenge in the food delivery business, which is heavily dependent on quality and consistency, was to find high quality raw materials on a day to day basis.

But fast food delivery, the kind that made Rocket Internet pay $170 million for Kuwait’s Talabat and Delivery Hero pay $598 million for Turkish Yemeksepeti, is difficult, as Egyptian startup Engezni.com found out.

Engezni originally launched in early 2013 as a food delivery rival to Otlob, but a number of challenges, including a lack of trust in epayments and a shortage of data generally about the industry, forced them into an early shift away from that industry.

Today the business is a social food network which crowdsources ‘food adventures’ in seven Egyptian cities and provides advertising services to food and beverage SMEs.

“However the natural order of things now in Egypt requires we add even more touch points to the journey which adds friction to the process. Such as call centers and employees to relay orders to all restaurants who are not yet on the grid,” he said. “This is why we dropped out of the food delivery business for the time being.”

Engezni is one of Egypt’s main food discovery startups, operating in a space that’s beginning to attract not only local but international interest too.

Elmenus.com is one of the main players, a directory that founder and CEO Amir Allam said helped users find “what to eat” rather than “where to eat”: if other platforms suggest best restaurants, Elmenus identifies the best dishes.

“We utilise data that is powered and enriched by users' likes and photos [and] we amplify our offering by recommending dishes to users based on their past behavior,” he told Wamda. 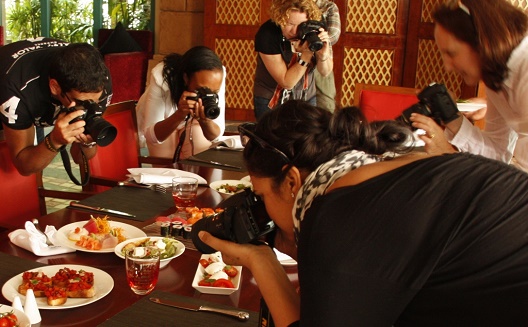 User reviews and pics are a business builder for food discovery startups. (Image via Arabic Zeal)

This allows Elmenus to function in a similar way to Yelp, employing a bait and hook model: they give restaurants a free page on their site and once it starts attracting user-generated reviews and gaining traction, Elmenus begins selling its advertising services. Its stats currently sit at 1.5 million website visits a month and 160,000 app downloads on iPhone and Android.

Jordan-based online directory Jeeran was exhibiting at Egypt’s big startup conference Rise Up in December, and had added Cairo in April to its portfolio of 36 Arab cities in six countries.

Jeeran started in 2000 as a restaurant directory and review site, but diversified to include gyms, doctors, shopping destinations, mechanics and more.

Chief product officer Romouz Sadek told Wamda that Jeeran’s detailed reviews were key to its success, but knowledge of regional markets and hyperlocal cultural nuances, coupled with their Arabic language edge, distinguished them from similar apps such as Zomato.

The Jordanian startup has funding from ATH, 500 startups and Intel Capital and is looking for more to expand into markets such as Saudi Arabia, unlike Elmenus and Engezni which have relied on seed funding and bootstrapping.

“Egypt is a big market, and at the moment we believe the space of deep discovery has not been tapped properly yet. Delivering extensive reviews and a quality directory needs one to dedicate a lot of effort both on the ground and online which is why we are confident that our value proposition is better than that of Zomato or others,” Sadek said. 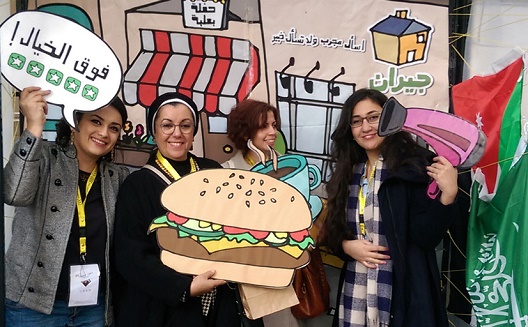 Jeeran's Egypt team with 138 Pyramids founder Niveen El Tahri (second from left) at the Rise Up Summit 2015. (Image via Twitter)

All startups in this space monetise their offering by selling targeted advertising and/or page customisation options, so restaurant owners and operators who are not internet literate become a bottleneck to the process.

Elmenus’ Allam and Engezni’s Ashraf both concede that the restaurant industry has yet to catch up with the whole digital sphere.

“However with younger people running restaurants now and the growing adoption of Facebook marketing solutions, restaurant owners are realising the value and benefits of our targeted offering” Allam said.

A bit of both

Then there are the startups who do both delivery and discovery, such as Mumm, Aklni and DishDino, which connect home cooks with working professionals.

Mumm founder Waleed Abdelrahman explains his startup as a sharing economy venture, which creates opportunities for women at home to generate income by connecting them to people willing to pay for healthy home cooked meals.

Mumm has been up and running almost one and a half months now and is already racking up orders.

“We aim to provide customer centric, consumer inspired dishes. We are ensuring that our operations are solid,” Abdelrahman said. “Right now what we are looking for is talent to join and grow our team.”

Aklni is a similar business and is currently (at time of interview) adding the final touches to ensure their home cook network is compliant with food safety, hygiene and has consistent delivery standards.

Both Abdelaziz and Abdelrahman said managing a team of delivery boys in Egypt was a herculean task, especially because both startups relied on their website and automated systems to relay orders. They said having a qualified, consistent and tech literate delivery fleet was essential, but hard to assemble.

As these startups attempt to master a model that can scale across Egypt and beyond these details become more and more critical.

So far none have managed to make the break from the Egyptian market, but as time goes on perhaps the region will begin to see viable competition striking out from MENA’s largest market.