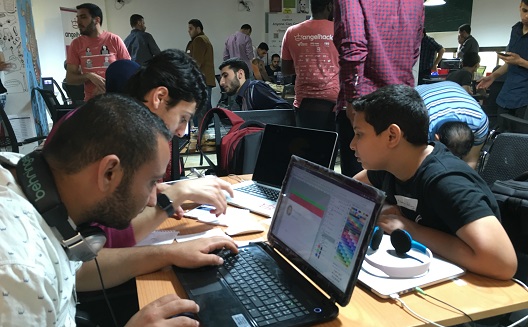 Coding is increasingly becoming a critical skill, empowering anyone who wants to learn by the ever increasing online ‘learn to code’ resources, and this is as true in the MENA region as it is in the rest of the world.

In Palestine young and established entrepreneurs are brushing off their coding skills in order to participate in the local job market.

This was noticed by AngelHack after an initial visit to Gaza in early 2016 where a visiting delegation was impressed by the local startup ecosystem and tech community and decided to run a hackathon there as part of its global coding competitions, so in May ran its first events in Palestine - one in Gaza and one in Ramallah. This comes as an addition to other coding and tech-startup competitions in Palestine like Game Zanga and Startup Weekend.

“Every year has a new theme as we are trying to have more developers, and this year the event was about social good,” AH PR manager Kelsey Ruiz told Wamda.

For the local ecosystem in Palestine, the events were an opportunity to connect, collaborate and code, but were not the end.

For example, Ali Za’anin, a participant with a business background, tried to learn basic coding and come up with a solution in a short time frame and was just able to develop rough sketches for his intended security app for storing different passwords. He’s planning to keep developing the app.

A thriving developer community in Gaza

Palestinian Universities annually graduate around 30,000 skilled individuals, many of them have ICT-relevant skills. 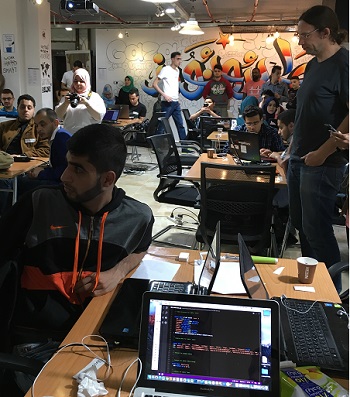 In the Gaza Strip, graduate developers are often seen as having talent and requiring a modest salary - around $400 a month - but lacking soft and market skills. This is something that incubators and freelancing agencies aim to change by supporting skill learning for graduates locally via online sessions, local competitions, and peer-learning as those graduates are not able to leave for specialized training or joining jobs abroad as a result of the prolonged closure.

Major universities in the Gaza Strip including IUG, Al-Azhar and Palestine have ICT and software development courses embedded within their faculties, and the tech scene there has seen success stories, such as Castlesoft.

AngelHack Gaza (right) was held on May 6 in collaboration between AngelHack and Gaza Sky Geeks, and over 20 teams delivered apps to boost communications between couples, home services on the fly, personal health trackers, help farmers track crops, and a password protection solution.

Nausheen Ali, AngelHack's vice president of marketing, said the high number of women participating was equal or higher than other places around the world.

Rana Alqrenawi, founder of software startup Genius Soft, led her team to develop an Arabic-friendly platform helping people with no technical knowledge build websites. She said that the time and effort needed were challenging, but she ended up with the award for the best project manager.

The hackathon winner was a home services and automation app called Homee where the team developed a prototype in just 24 hours and won a place in AngelHack’s Hackcelerator program.

A mature developer network in Ramallah

One week after the first hackathon, the Ramallah event took place at the Yamsafer office.

While the West Bank Educational System and Developer Community resembles that in the Gaza strip, the relatively facilitated economic conditions and accessibility has led to the development of established tech-startups like Yamsafer, Ibn Battuta, Redcrow, and Pinchpoint.

Ibtikar Fund COO Ambar Renova, who was judging, said the event was a good opportunity for forming connections and a good learning experience for those wanting to develop apps.

The four participating teams developed projects including an app for house cleaning where one can see and connect with other people willing to clean their house, and a Facebook-integrated bot by a team from Yamsafer to look up travel destinations. But the winning project was the Bareedee app for package delivery by freelance couriers.

"It really feels great and wonderful to win at AngelHack and be part of this awesome opportunity to join the Hackcelerator program," said team member Ahmad Abu Omar.

An advanced program for developers

Winners from both events are now preparing to join Hackcelerator, an invite-only acceleration program in Silicon Valley run by AngelHack.

The program is a 12-week remote mentorship period that supports developers and founders wherever they are, focusing particularly on hackathon projects rather than full startups. At the end of the 12 weeks founders are flown to Silicon Valley for a week of mentorship, ending with a demo day where they get to meet and connect with high-profile investors. Successful Hackcelerator graduates include Airpost and Appetas, that were acquired by BOX and Google respectively.

Within an ecosystem thriving with startup and tech-events like AngelHack among others; the Palestinian startup and developer community will remain to be growing and promising in the foreseeable future.

and slowly, impacting the economy as a whole supported by the efforts of community leaders and supporting organizations, and empowered by new enthusiastic young coders hoping to make an impact with their software and apps.