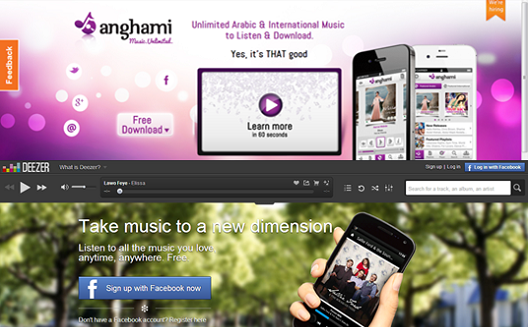 The streaming music platform, which launched in 2007, had about 2 million subscribed users and 7 million active monthly users as of December 2012, and aims to have five percent of the global music market by 2016.

Meanwhile, Lebanese music streaming startup Anghami last year leapt to the top on iOS app lists in 12 Arab countries and gathered half a million users in just 3 months, 30% of whom are using the service daily. Anghami was also recently shortlisted for the Best MENA Startup and Best Entertainment, Audio or Video Startup at the Europas this coming year. But does this small team of 11, have what it takes to face a 6-year-old international player?

If Anghami’s founders know one thing, it’s that people consume music differently in every part of the world. Anghami has worked hard to create an experience that's unique to listeners in the Arab world, explains co-founder Elie Habib. For example, consumers in the region often prefer mobile music to share easily with friends. Thus Anghami is only available on smartphones.

Deezer, however, is also available on the web. Though Anghami feels that a mobile focus separates them from the pack, Deezer is present on smartphones and the web simultaneously. Yet Anghami offers its mobile streaming service on nearly every smartphone platform, whereas Deezer is much more limited in its mobile presence.

Habib notes that consumers, especially in the region, often look to a streaming platform for new music suggestions. Anghami is paying special attention to discovery and recommendations, explains Habib. “We started with a Personal DJ function. We want to help people discover music.”

He teases that Anghami is releasing new features soon, including an Arabic version later this month, and new APIs to encourage independent developers to add to the platform. Currently 75% of Anghami users’ smartphones are set in English, and only 25% in Arabic.

“Deezer is focused on 180 countries, we’re focused on 15. May the best one win,” he challenges. The two platforms will also compete with France-based Yala Music, which was founded in 2010 and operates on web and mobile in the Middle East.

Before starting Anghami, Eddy Maroun and Elie Habib made sure to secure key deals with regional and international labels. They currently feature licensed content from leading Arabic labels Rotana, Mazzika, and Melody, but also from major international labels Universal, Sony, EMI, Warner. Their biggest asset right now is an exclusive 3-year contract with Rotana for streaming music in Lebanon, the UAE and Saudi Arabia.

Anghami has also implemented a partnership with Orange in Jordan, and is going to launch one with Zain in Kuwait soon. They will build on these telecom partnerships with 3 or 4 more companies in the region, they say, and they've also finalized a deal with media conglomerate MBC. Through these partnerships, Anghami hopes to build trust with consumers before other companies move in. Several artists have also launched their album exclusively on Anghami, and the team hopes to attract more.

Can Deezer, with a larger music catalogue and established model, topple a platform with some key regional partnerships? The question is whether being a first mover gives Anghami the advantage. Users may not want to switch to another platform after their preferences and playlists are saved.

Deezer has the distinct advantage of a large international catalogue with over 20 million tracks available for streaming. But Habib isn’t threatened. “Everybody says ‘we have 20 million songs," he says, "but most people end up only listening to 100,000 songs. What you really care about is the core catalogue. Now, we have 2.5 million songs. By May or June we’ll have 5 or 6 million songs.” Anghami prefers to focus on music quality and regional appeal, he says, rather than on the number of songs available.

“We’re pretty excited to have Deezer coming in. It validates that we are in the right place at the right time. We’re looking forward to having a healthy competition. At the end of the day, the user benefits from it,” says Habib.

The two services will probably cohabitate peacefully for a time. “The percent of people who are streaming music versus the entire smartphone population is so small. For us, it’s a growing market all over the world, it’s a nascent industry. A lot of things can change. It’s going to take a while before we’re really competing head on,” insists Elie Habib.