When the Arabic medical information platform AlTibbi accept their World Summit Award for best mobile medical content in February 2015, they will not just be starting their new year on a high note; they will also be drawing attention to a largely startup-free sector Middle Eastern business: healthcare.

Back in September 2013 we posted an article about how, with a rapidly increasing mobile penetration and developing entrepreneurial landscape, the Arab world and its entrepreneurs interested in m-health (mobile healthcare) could take advantage of a sector largely underdeveloped. Now, we want to take a little look at some of those taking steps towards filling the gap, from the information platforms to the listings to the fertility apps.

The regional healthcare sector is one that remains relatively difficult to enter for startups. Considering the hundreds of millions of people who populate the region, and their various health issues, there are relatively few medical resources online in Arabic. This is beginning to change, however, and this year saw more interest than ever in region-specific, interactive apps and websites relating to medicine and health in Arabic. 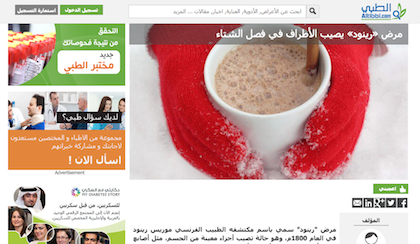 The team at AlTibbi, a medical portal that provides users with articles and information, are one of the startups addressing this dearth in the sector. “Users can find a lot of static information now on the web,” says founder Jalil Allabadi. “But none that allows for a personalized, private, immediate, and trustworthy experience” like that which one can get from a face-to-face interaction. Since it started out in 2010, as a basic online medical dictionary, AlTibbi, has gained 7,000 verified Arab doctors in the region. Operating as a kind of ‘marketplace’, as Allabadi puts it, the doctors, unpaid, offer their knowledge, writing articles and review website content on a daily basis. Only when working through Altibbi Istishara, the premium Q&A service, are doctors paid.

Appointment booking sites are also in demand. Launched in April 2012, DrBridge, an Egypt-based appointment platform inspired in part by the American Practice Fusion, introduced its complementary app in January of this year. Aware of the scarcity of the medical apps, cofounder Amir Barsoum sees DrBridge as an emerging market opportunity. “It’s about building up a digital healthcare ecosystem,” he says. With around 1,200 doctors subscribed and approximately 10,000 bookings made each month, Barsoum says that users are enthusiastic.

Barsoum is confident that DrBridge, which is currently only operating in Egypt, can be scaled to South Africa, Morocco, the Levant countries, and Saudi. “These are places where our model can flourish and enhance health care delivery in terms of quality, accessibility, and cost.” Despite this forward-looking sentiment, as of now the team has yet to announce exactly which market is its next target.

The immaturity of the regional mobile health sector offers opportunity for companies like DrBridge and AlTibbi, but not without perhaps more than its fair share of challenges, one of which is partnering with notoriously conservative regional governments. Palestinian startup MobiStine, another medical information provider, operational since 2011, is facing particular legislative challenges associated with operating in Palestine. “The authorities and decision makers are driving it slowly,” says founder Husni Abu Samrah on a call with Wamda. “We need a body to help us connect and influence, and finally adopt.” Samrah says that his team is having a lot of difficulty connecting with government institutions in Arab countries, necessary for scaling, saying that unless you know someone on the inside it’s pretty much impossible to make an impact. 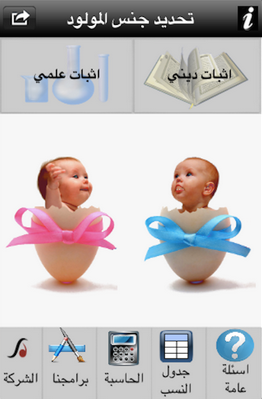 MobiStine’s apps, which are designed with families no longer living close to one another, cover a range of areas, from monitoring blood pressure to bed wetting to pregnancy. The latest, yet to be launched, is GraviLog, which pregnant women can use to have electronic access to their medical records. Then there’s GraviLog with EMR, an online records system for doctors, to be used on both computers and smartphones.

“[Online health services] can really be an invaluable tool for patients who are too far to visit a doctor,” insists Zineb Drissi, the Moroccan founder of DabaDoc. Online since September 2013, DabaDoc is a multilingual search engine for doctors, dentists, and ophthalmologists in cities and towns throughout Morocco. The service provides users with profiles of the doctors, as well as the ability to book appointments online, especially useful in a country where, according to Yacoub, finding the right doctor in one’s area can be a tricky proposition.

The medical field is “generally highly regulated,” says Drissi, and “therefore challenging and not as startup-friendly as other sectors. But it also presents an extraordinary opportunity because of the market size and how critical the sector is to any society.”

Getting the word out

For Abu Samrah the biggest hurdle for startups like his is the general lack of knowledge of their existence – not to mention the possibilities. While MobiStine’s EMR system is used now in several hospitals in the UAE and Palestine, he says the lack of media attention from local press means lack of local awareness to their existence.

For AlTibbi founder Allabadi, mass health awareness will require more attention from stakeholders. “It is evident from the thousands of queries we get monthly from our MENA users,” says Allabadi, which he says belie general lack of basic knowledge of healthcare best practices. Allabadi believes that awareness campaigns need to go beyond just billboards and move more towards participatory methods such as education.

Of course, taboos around various health topics are still very present in the Middle East; among these is a reticence for men to discuss matters related to their health. When it comes to AlTibbi’s users, Allabadi says that while women are still the majority, the percentages have shifted in the past year, going from 84% majority women to just 65%.

“There is much embarrassment from men and women alike,” he says, “particularly when it comes to sexual health, but the numbers of men making inquiries is [steady and growing].” But while some users fear their doctor somehow seeing what they ask about on AlTibbi, Allabadi says that others “obviously don’t care who sees them,” posting about very personal topics on the site’s very public Facebook page.

Prior to receiving funding from a European VC, the MobiStine team relied on the famous ‘Three Fs’ (family, friends, and fools) to fund its activities. This is unsurprising: the lack of knowledge about the burgeoning mobile healthcare sector extends to regional investors as well as potential users, which no doubt causes hesitation.

But the tremendous potential of the mobile health sector – to the tune of a projected $23 billion USD worldwide – has not been lost on a savvy few.

DASH Ventures, one of the investors in AlTibbi’s recently announced funding round, had been looking for some time to invest in the healthcare sector. A fund affiliated with the largest generic pharmaceutical company in the region, Hikma Pharmaceuticals, [founders of DASH were part of Hikma’s founding team], it was only a matter of time.

When asked why it was now that they were investing in the regional healthcare sector, DASH’s managing director Omar Sati points out some problems he’d found in other healthcare startups that has stayed his hand as an investor. First, a lack of focus on one service is a big problem, he says. It’s all too common for startups to start thinking immediately about monetizing so they come up with different revenue streams and suddenly they’re an ecommerce site, a marketplace, and share economy all at once.

Domain experience is also a benefit. “Mobile healthcare a niche vertical,” he advises, “so you need to have that domain experience. Jalil [Allabadi, AlTibbi’s founder]’s father is a doctor,” which checks that particular box. “Or,” Sati continues, “the startup should at least have access to a network.”

“At the end of the day if you’re solving a problem, you need to understand the problem.” 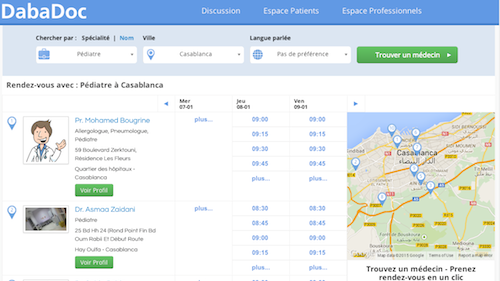 Founders from MobiStine and DabaDoc are in agreement on the lack of interest, or the inability to act, on the part of regional government entities. “I really believe that anything related to startups should be run and managed by like minded individuals…. Unfortunately the bureaucracy inherent in government entities will often hamper this so it’s very difficult in Morocco or any other country,” says DabaDoc’s Drissi.

“Funding alone in a large majority of cases is not as effective as when accompanied with top notch mentoring,” she continues.

Abu Samrah says that not knowing someone in government is a real handicap: “We are doing something for the nation and people’s health,” he says. “We can’t reach them and would love to get help from someone!”

As a result of AlTibbi successful funding round, the team will be launching an English language Q&A section at some point in 2015. The startup has also fielded inquiries from Iran and Turkey that could trigger some serious expansion.

So, the sector is looking up, for the most part. Businesses are keen to get into it and there are investors looking for their next medical project, however, until a few things like government interest, and health taboos are shunted out of the way, along with maybe a little lack of understanding the market, the Arab world could soon find itself a awash with m-health possibilities.