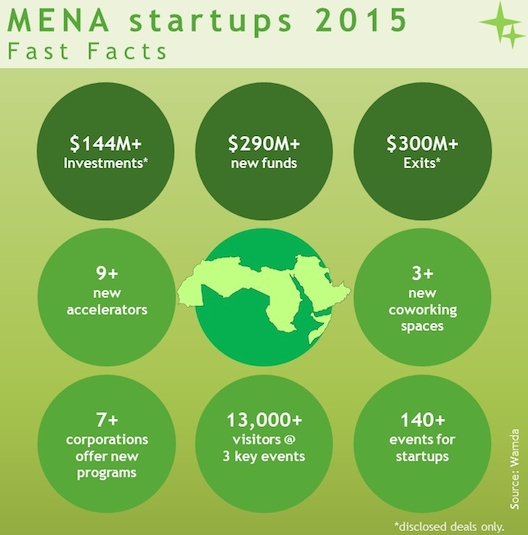 Throughout 2015, support for entrepreneurs in the Arab world continued to grow.

As Wamda’s review of the year’s investments and exits noted, MENA not only had its $60 million Series C round for Careem and the $170 million exit of Talabat, but already exhibits a startup ecosystem that stands at the global average - with the UAE taking the lead.

Given the region's protracted conflicts and multi-faceted challenges, this is a notable standing that witnessed many encouraging improvements in 2015: from Dubai to Casablanca, at least nine new accelerators, three distinguished coworking spaces and seven additional corporate programs for startups were unveiled.

The Gulf: arrival of hi-tech accelerators

More than two in five of these events took place in gulf countries that seek to build knowledge economies. It is in the gulf countries where most of the new startup hubs opened their doors. The Dubai Technology Entrepreneurship Centre (DTEC), offering 350 workstations, is one of the largest coworking spaces in MENA to date. Equally notable is Astrolab’s Google-partnered space that now offers, among other things, legal and logistical support for entrepreneurs.

And while the UAE is often equated with Dubai when it comes to startups, Abu Dhabi had its share in new hubs as well. Flat6Labs Abu Dhabi arrived on the scene, with startups from around the globe applying for its accelerator program. Masdar city, in turn, partnered with BP world and launched The Catalyst - a unique incubator looking to invest $5 million in sustainability and cleantech startups. Another notable milestone is the arrival of IBM’s Watson supercomputer to MENA.

Significant milestones were also achieved in Lebanon. Beirut witnessed the launch of the Lebanon UK Tech Hub and Speed@BDD, with Flat6Labs Beirut expected to open its doors in early 2016. Beirut thus receives three out of the nine accelerators unveiled this year, a clear sign that the Circular 331 policy starts yielding the intended results for Lebanon. In Jordan, Zain started to partner with startups as part of its Traxn program. Accelerator Oasis500 and Egypt’s Flat6Labs partnered with Zoomaal, offering a crowdfunding accelerator program for the first time. The rise of innovative partnerships and collaborations clearly shows increased awareness of the potential held by MENA’s startups.

And the numerous events held over 2015 forged more relationships, yielded new ideas that will take shape throughout the new year and will tell of a regional community taking shape. Three events, likely the largest in the region - BDL Accelerate, RiseUp Summit 2015, and the STEP conference - counted a combined 13,000 visitors, according to the organizers.

This trend reached Algeria which got its first coworking space Sylabs, and picked up in Morocco were French accelerator NUMA established its Casablanca hub. Even in war-torn Syria, entrepreneurs refuse to let the situation destroy their hopes. The country’s first incubator Afkar+ opened its doors in Hama, run by the winners of this year’s Jusoor competition.

Taken together, 2015 was an exciting year. Experts predict that before 2020, select high-growth startups from MENA will crack the $1+ billion valuation. This will catapult the brightest of today's startups among the ranks of the world’s largest Internet companies.

Editor’s note: Research conducted by the WRL over the past year has generated a substantial database. It might not always be exhaustive, especially since there are many deal amounts that are undisclosed, but the trends are representative of the developments taking place. Any feedback you may have we welcome your suggestions to research@wamda.com