This post is the first in a new series offering a deep dive into the Arab world’s major startup sectors. This edition, focused on the region's gaming industry, will include several parts revealing the most important challenges, opportunities, and players in the region.

Update: Game Power 7 and Tahadi Games were previously listed incorrrectly and are actually game publishers. At7addak.com has also been added to the piece.

Over the past year, the gaming sector in the Middle East has gone through a major shift. It's seen the split of one of its most successful teams (from Birdy Nam Nam to Game Cooks and Gamabox), the closure of a few main players, and the launch of several new gaming companies that are experimenting in the space.

Overall, it's still a giant experiment; no one has cracked the model yet. From the nearly 30 gaming-focused startups we've covered from across the region over the past year, 18 original games have been launched. Only about nine really stand out. 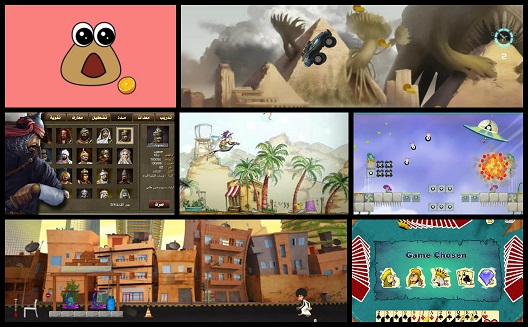 The regional opportunity, however, is huge. The Middle East, and the Gulf in particular, is some of the world's most active consumers of games, with a market estimated to be around $1.4 billion in 2011. Most gamers buy titles for consoles like Xbox and PlayStation, yet online and mobile games are also becoming more popular, thanks to rising penetration rates for smartphones- expected to reach to 39% by 2015- and internet use, which is higher than the global average at 40%.

Now, the question is: can regional game developers reach those consumers?

If the example of Angry Birds teaches one thing, it’s that there’s no simple formula to creating a successful title; Rovio famously created 51 poor performing titles before launching Angry Birds. But to understand what gamers in the region are building, we took a look at the 30 companies we've interviewed.

Here's what we found:

1. Types of gaming companies in the region

As I previously wrote, there are generally three kinds of gaming companies in the region: developers, publishers, and distributors. Drawn from data on the startups we've written about over the past year, this graph demonstrates which companies are building in which verticals. 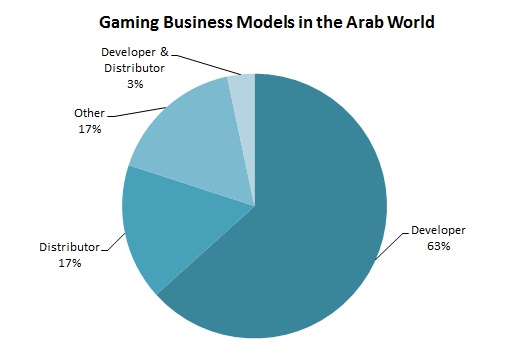 Developers are the designers and creators of games. In the Arab world, many developers go indie, releasing their games without using a big-name publisher or a distributor to boost their profile. Here are a few examples:

Publishers are the manufacturers and marketers of games.

Although the Arab region only has a few native publishers, regional developers sometimes look to global publishers. Usually publishers also develop and release games they’ve developed in-house, using their market expertise and connections to boost the profile of a given title. In the region, two include:

In this region, several developers have worked with international publisher Chillingo, which some say can both help and hurt (more on that in our next post). Two include:

Distributors come in a variety of shapes. Some distribution platforms allow developers to post their games for download online (usually for in-browser games), while others provide marketing and distribution in specific regions. In the Arab world, typical distributors with their own landing page include:

Other distributors work to localize, advise, and occasionally develop certain aspects of a game, like Jordanian game development studio Maysalward, which partnered with San Francisco-based publisher One Spear Entertainment earlier this year to distribute and localize ShaqDown in the region.

The biggest console game creators, such as Sony, Microsoft and EA, seek distributors in regions that they are unfamiliar with. One company working in this space is game review site DvLZGaME, which promotes console and PC games through its active online community and organizes offline local trade shows, reviews, demos, and competitions.

Thus far, most of these distributors work with global games that hope to reach the Arab region.

Others that don't fit into the above categories include:

2. Which gaming platforms are developers choosing?

Regional gaming companies generally develop for mobile and social, not for console or PC, although most gamers in the region seem to spend more on console titles. 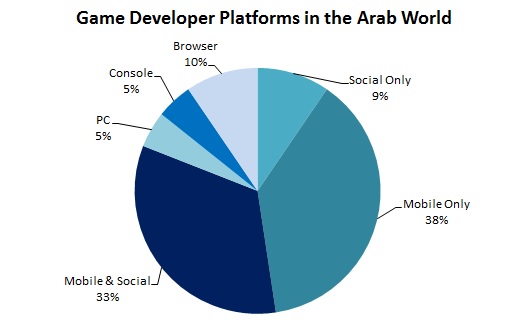 Mobile: Mobile games are the most popular, as the focus of 15 of the 21 development companies we’ve interviewed. This is likely becuase mobile games usually require less time and money to build. Some developing in this space include, among many others:

Social: Famous titles like Zynga’s FarmVille and CityVille fall into this category. Most build for Facebook, but some other social networks with gaming capability are on the rise. Startups developing social games in the region include:

Browser: Usually a bit more basic than console or PC games, browser-based games are playable online and are often available on specific game sites which offer a range of casual or hard-core gameplay, usually with lower resolution graphics. These are sometimes massively-multiplayer role-playing games (MMORPG) (some even look like World of Warcraft knock offs). Some in this space include:

PC: PC titles are generally downloaded onto your harddrive and played as a standalone title; some are MMORPGs where users can play with or against other players. No notable PC titles have been introduced from regional developers so far, but the one company developing an Arabic MMOPRG in this space is:

Console: No notable console games have been created in the region yet. However, one company is working in the space:

3. How gaming startups are monetizing

Console and PC games are almost always paid for upfront, although increasingly subscription-based models are in effect with monthly Xbox Live account payment requirements and regular monthly World of Warcraft fees, for example. Browser games are either paid for upfront, on a monthly basis, or come free, often with a bunch of cluttered ads. Some have used in-game purchases however.

The most interesting monetization options come with mobile games. Going freemium is a popular choice, as developers can leverage in-app purchases and a lower barrier to download. Yet some entrepreneurs here in Lebanon have defended their choice of paid app, insisting that money can still be made with downloads. The story of Lebanese game Pou proves their point; it costs $1.99 to download and has attracted millions of global users.

But statistics, based upon the 16 mobile games we've reviewed, show that the freemium model is still the most popular for developers in the region: 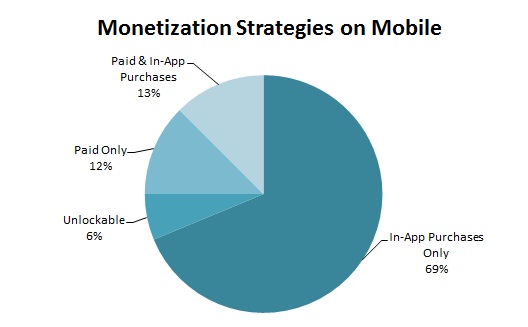 In-app purchases are on top, with 67% of companies choosing it an a revenue model. Others, like Jordanian game developer Bee Lab's ShibShib War, use a hybrid model; players can download a game for free and then pay to unlock subsequent levels, much like the model Angry Birds now uses. This model can be a smart way to hook players and then monetize.

Whatever the chosen option, it's best to maximize downloads; the more easily a game gets into someone’s hands, the more likely it will be shared and reshared. Experimentation is important for each company, but without downloads, no revenues can follow (you can tell I'm an advocate for freemium games).

Stay tuned for part two of this gaming sector overview, where we will look at each of the region’s gaming companies and how they are overcoming challenges specific to their country.