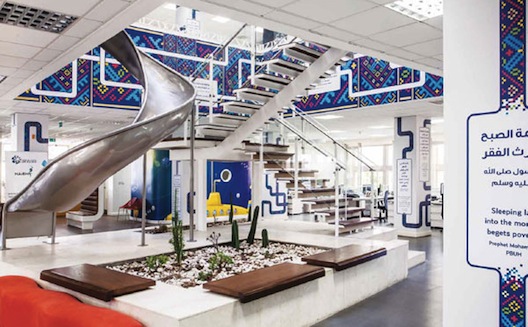 Two and a half years ago, we published a selection of 10 Accelerators in the Middle East and North Africa, most of which at the time were still very young. Since then, the regional ecosystem has turned into a vibrant scene that’s constantly trying out different models and iterating. Some accelerators shut down, like Seeqnce, Meydan and Cairo’s Plug and Play space, but many more have opened, some with great success, helping successful or promising startups take their operations to the next level.

First off, let's make it clear what we're talking about. An accelerator is a competitive program that selects a few early-stage startups to join a class or batch in order to help them kick-start their product. Accelerator programs often offer seed investment in exchange for equity. By a given deadline, selected startups should be able to boost traction and raise funds. Because young entrepreneurs in the region may need more time and attention than in more mature ecosystems, some accelerators in the region may not match exactly the generally accepted definition of an accelerator. Here, we've selected the programs that match at least 2/3 of the criteria mentioned above. (We haven't forgotten incubators though, so stay tuned for an upcoming list of the incubators in the region.)

Here is a list of accelerators in the region ranked by date of launch:

Based: Amman, Jordan
Launched: September 2010 by a board of directors led by Usama Fayyad, previously Yahoo’s Chief Data Officer

Model: Tech-oriented startups apply and complete a five-day intensive Boot Camp. Then, qualified startups proceed to receive 100 days of mentorship at Oasis500 (pictured above), and pitch to receive 22,000 JD (~ $31,000 USD) of seed investment for 5-20% equity (depending on the stage of the business). Startups that demonstrate growth qualify for a second round of investment from 50,000 JD (~ $70,000 USD) to 500,000 JD (~ $705,000 USD), another 100 days of incubation, and a chance to pitch to a global network of investors at Oasis500’s Angel Network event. Famous alumni include Shopgo, Little Thinking Minds, Feesheh, i3zif, and Jamalon.

Model: Since its launch, Flat6Labs has grown to be the biggest Egyptian accelerator, and has adapted its model to better fit local needs. Flat6Labs Cairo selects 20 projects to attend a five-day bootcamp that gets them ready to pitch in front of investors. Flat6Labs selects a final six teams to join the upcoming cycle and receive $15,000 USD (100,000 EGP) for 10-15% equity stake, strategic mentorship, business training and workshops, office space, and a multitude of perks and services from partners (over $300,000 USD). By the end of the four-month period, Flat6Labs holds a Demo Day event, and selects startups to receive additional funding. Flat6Labs is part of the Global Accelerator Networks (GAN) founded by TechStars. Famous alumni include Codly, Instabug, Integreight.

Based: Jeddah, Saudi Arabia
Launched: May 2013, by Qotuf AlRiyadah, in collaboration with Flat6Labs Cairo

A new spin-off has been announced in Abu Dhabi.

Based: Manama, Bahrain
Launched: July 2011, by a board of directors led by Sami M. Jalal of Mohammed Jalal & Sons

Model: Tenmou typically invests around 20,000 BHD (~$50,000 USD) for a 20-40% equity stake. Startups must have a team of 2-4 Bahraini founders, but need not have a business plan. Tenmou doesn’t offer workspace, but provides three months of intensive mentorship, culminating in an Investor Day at which startups pitch to investors.

Based: Thuwal, Saudi Arabia
Launched: September 2011, by The King Abdullah University of Science and Technology (KAUST)

Model: VentureLab is the flagship program of KAUST’s Entrepreneurship Center. This sector agnostic ten week entrepreneurial program is based on Lean Startup methodology, encouraging entrepreneurs from all over the region, to “go outside the center/lab and talk to customers, partners, etc.” in order to get customer validation and then develop a minimum viable product (MVP). The program offers a two week pre-acceleration bootcamp to 20 startups, only 10 of which are selected for the next stage: six weeks of weekly sessions with the VentureLab team, international instructors, mentors, entrepreneurs, and investors are planned, and one week of preparation for demo day. The accelerator doesn't take equity, but can offer pre seed fund and seed fund.

Model: During the second quarter of 2014, the accelerator previously known as Startup Factory, received a 26 million TND ($16 million USD) investment from the Qatar Friendship Fund (QFF), which lead to a major overhaul, and a change in name. The accelerator now named Intilaq offers free incubation for six to nine months, a place to work amidst the soon-to-be entrepreneurial hub, and the possibility of an in-house investment of no less than 250,000 TND ($150 000 USD).

Model: This program focuses on entrepreneurs who are the idea stage and has changed quite a bit since its launch in late 2012. The program now spans 120 days, plus 120 days of post-acceleration support and fundraising, and seems to be strictly divided into different steps. The first 30 days are about validating the idea through market research, the next 60 days about prototyping, and the following 30 days about launching and pitching. Entrepreneurs receive a place to work, training, and mentorship, and $30,000 USD in seed funding (services and cash) in exchange for 10 to 20% equity.

Based: Ramallah, Palestine
Launched: January 2013, by the Leaders organization, with the support of the Welfare Association

Model: Fast Forward offers a $30,000 USD investment in services to each startup, and $20,000 USD in cash, in exchange for 10% equity. During the four month acceleration, the organization offers a place to work in the West Bank, access to mentors and experts, and potential hosting at a regional accelerator. The program focused on weekly modules, which cover different skills, such as business pitching, marketing, product development, and user experience. Read our full profile here, and latest updates on alumni here.

Model: This accelerator supports startups that are still in the idea stage, and offers training sessions, over the course of nine months. Business angels and partners may invest up to TDN 120,000 ($76,000 USD) in the startups at the end of the acceleration period. Read Wamda’s profile here.

Model: TURN8 is a 120-day seed accelerator owned by the government of Dubai, launched in collaboration with DP World, one of the largest marine terminal operators in the world. Prior to each wave of acceleration, TURN8 spends four months organizing pitch events to scout international startups. This year, these will take place in Dubai, Cairo, Singapore, Kuala Lumpur, Kiev, Minsk, San Francisco, Ankara, Warsaw, and Bucharest. The program selects 10 startups and invests $30,000 USD. Selected startups are hosted in i360-ran coworking space The Cribb.

Based: Cairo, Egypt
Launched: July 2013, by The American University of Cairo

Model: This program offers startups with an existing product or prototype, at least one full-time founder, and a product that is “different from any other product in the Egyptian market,” five months of acceleration at the famous university. Entrepreneurs get access toa network of investors, training with professional experts in marketing, sales, and project management, and assistance with their business plans, along with 20,000 EGP (~$2800 USD) in financial assistance - a low amount the manager explained to Wamda here. If graduates succeed during the first round, they can win acceptance to eight more months of incubation.

Based: Ramallah, Palestine
Launched: Mid 2013, by MENAApps in partnership with USAID

Model: Every quarter, Arabreneur selects a few companies for its acceleration program. Startups receive investments in the range of $50,000 – $150,000 USD based on the requirements and stage of the company (the company has not disclosed equity arrangements), and offices in a 300 square meter space in Ramallah. The program is flexible, and startups can stay until they're ready to get a VC investment or exit, which means typically between six months and a year. Read Wamda's profile.

Model: After two years of supporting the Gazan startup ecosystem, Gaza Sky Geeks (GSG) entered the acceleration space. During its first round of acceleration, Gaza G partnered with Oasis500 and used a similar model: selected teams attended a bootcamp and top teams from the bootcamp receive three months of mentorship and hosting, during which they pitch several times in front of GSG and Oasis500. The winning startups received $14,000 USD in cash investment from Oasis500 and traveled to Amman, Jordan.

GSG is now preparing for its second round of acceleration. Now, GSG provides 6 months of acceleration in Gaza, and acts as a broker between Gaza startups and several investment partners. Startups go on targeted trips throughout the region.

Model: Juice Labs is a small-sized program dedicated to startups specializing in web/mobile. It plans on accelerating only four startups per year, two every six-month cycle (check Wamda's coverage here). Each startup will be hosted in a space already used by a team of developers, designers, marketing and business developers as well as creative content production team, and will receive mentorship and an investment of $25,000 USD in cash and $25,000 USD in services from individual investors, for an equity stake of 10-20%.

Based: Tunis, Tunisia
Launched: May 2014, by the African Bank for Developement and Yunus Social Business

Model: This program aims to boost Tunisian social enterprise thanks to trainings led by international consultants flown to the country for the program, and the participation of local entrepreneurs and professionals. At the end of the two months, an investment comittee will decide to invest between 100,000 TND and 600,000 TND (i.e. $60,000 and $360,00USD) on a case by case basis. Read our profile.

Other accelerator-like initiatives include Ibtikari, an investment and mentoring program dedicated to Emiratis interested in developing a startup in the tourism sector, even if they don’t have an idea, and MENA Apps, an organization that invest in and mentor startups in Amman, Jordan.

You think we've missed an accelerator? Tell us more in the comments section below.